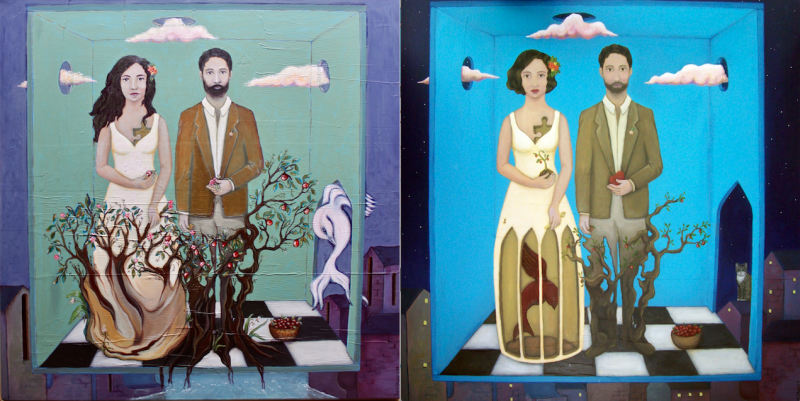 A picture speaks more than a thousand words. Many of us see the importance of photography to keep track of our physical changes. We keep pictures of family reunions, anniversaries, birthdays, new year celebrations and so on. But pictures rarely can capture the changes in our believes and emotional states through time. To me, painting is a way to understand and keep track of the emotional changes in me and I use symbols to depict those changes.

I looked at the corner where I storage all the paintings I haven’t sold. They show the person I was five, eight or ten years ago. I thought about the time, energy and money I invested in them and I wondered if I wanted to leave them there as they are: A testimony of the person I was or a dead memory. Instead I took two of them, broken. A hole in the middle of each canvas speaks of the adventure of moving from St. Pauli to Bergedorf that left me with four broken paintings. I could repair them, make them look like new and conform with the compositions just as they are. Or I could change them and show the reality of the person I have become. I decided for the second option.

To change a painting first I must evaluate what symbols I used and which is their relevance today. Do those symbols still have the same meaning? I use plants and flowers to represent my femininity and my cultural identity. I also use animals to represent aspects of my persona that I want to develop or improve. Water, buildings or ruins are used to represent a migration process in which I leave the old and accept a new life in Germany. Fruits are in my paintings a symbol of abundance and independence but in “Retrato de familia, 2010” these were depicted in small size. In the new version of 2018, natural elements like flowers and fruits become predominant and in this sense, a more optimistic representation of the present life. The fish-bird, symbol of endless change, appears free of its cage and between the outside world and the inside world, the public space and the private space; breaking the barrier between this two sides of the same person.

In “Moriviví, 2010” leaves were displayed in uniform green, more as a background than as a key element bacause I was restraining myself from displaying my cultural identity. In its new version “La mecánica de mi corazón, 2018”, plants dominate in the front as well as the background and create a frame for the center figure who now holds a fish-bird in bright green. In this way I reinforce the importance of my gender and my cultural identity. The plant around the heart and in the center of the composition (Moriviví-Mimosa pudica) represents perseverance and preserves the meaning of the painting even after the title has been changed.