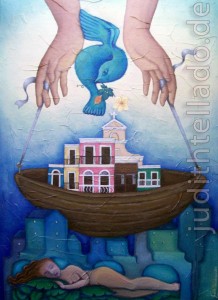 The dream: I was standing in the middle of the street. The city was dark. I was naked. The buildings were standing all around me like clone giants. In the night sky, several meters above my head, floated the boat. Its dark wood remain in the shadows while inside grew a tall and bright city. Illuminated by it self, the buildings had a colonial architecture in bright yellows. From it came the music of a thousand bands and a thousand songs. Then I recognized it. It was the old city of San Juan.

When I painted “El sueño del recuerdo” in 2011, I decided that I wanted to represent my healing process. The messenger floats with a branch of the cundeamor (Momordica charantia) flower. Many years before, when I was a little girl playing in the back yard of our house, my mother showed me how to eat the seeds of the cundeamor. Only many years after I learned that this magical plant of my childhood was a medicinal plant. But to me the true medicine was in a single memory: my mother standing next to a fence covered in the twisted branches of the cundeamor plant. She lowered her hand and in her thin fingers opened the yellow oblong shape which contained bright red seeds. She said: Don’t chew them, just lick them and spit them.